My life has been a bit insane these days, but I am working… however slow. Currently I have several things in the works. I’m finishing up a story—Devil’s Heart—with Lexi Ander. I’m so excited about this series we’re putting together. It’s an urban fantasy motorcycle club romance. Goblins, fae, elves, and sooooo much more.

I’m also working on my Arkansas entry for the Dreamspinner Press States of Love collection. There’s an amazing man out there who is so much inspiration for me who has allowed me to use him as my subject for this book. I cannot wait to get this story down on paper. Much love to my very own Marco. 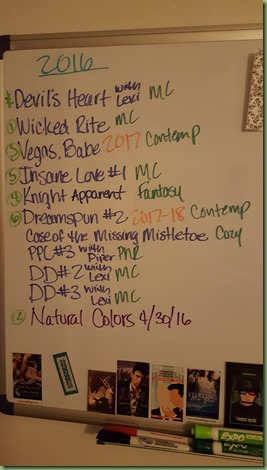 After I finish that novella, Lexi and I will be starting on book two or our Devil’s Dawn MC series. I also have a knight arranged marriage fantasy novel I have in mind, tentatively titled Knight Apparent. This was inspired by the lovely Megan Derr, who is full of plot bunnies.

Next up will be my first Dreamspun Desires story in which a hotel magnate meets his match. After that… who knows. I have several stories outlined and waiting their turn. So we’ll see. Somewhere in there, I need to get my Christmas story on paper. And probably (maybe) a M/M Goodreads story if I have time.

In the meantime, I thought I’d drop a few lines from Devil’s Heart.

In an instant, Énna stilled. His gazed dropped to study the green skin beneath his palms.

“Let me go.” Fear bled into anger and Énna jerked his shoulders to get away from Cookie’s hold.

“That really what you want, babe?” Cookie skimmed his nose along the back of Énna’s neck. “Cuz I don’t think it is. What I think is you liked what you saw so much you want to try it.”

Énna’s fucking body betrayed him when his cock twitched and he fought a tremor of desire. Because maybe… just maybe if Cookie wasn’t such an asshole. Maybe if he didn’t want to use Énna—and Énna had to remind himself, that yes, all the club wanted was to use him—that perhaps Énna could give in, give himself over. For once. He both loved and hated that Cookie brought that out in him.

“Yes,” he rasped. “I’m positive. Now, get your hands off me. They smell like skank and who knows where else they’ve been?”

“Don’t let Conah hear you say that.” Cookie made a dark sound that coursed through Énna, and then he tightened his grip, inhaling long and sensuous, as if breathing Énna in. “Smell fucking good, babe.”

Furious, Énna pushed at Cookie’s hold again, digging his fingers into the muscular forearm beneath his grip. “Don’t talk to me about your whore.”

He hadn’t meant to say that, but the last comment had thrown Énna off guard. Confusion fed his frustration as his body and mind warred over Cookie’s actions and his words. He kicked out catching Cookie’s shin.

“No.” That one word snapped out in Cookie’s deep baritone sounded more like a declaration than a protestation. “Do you really want to spend the rest of your life on your goddamn knees?” All of a sudden, Cookie sounded serious and angry at the same time. Énna stopped fighting and listened. “Be my fucking guest.”

Although he knew Cookie meant otherwise, his conflicted emotions and mind played scenes of Énna kneeling, looking up at Cookie as he swallowed his thick cock, on all fours as Cookie pounded into him, straddling Cookie’s hips as he rode the hell out of Cookie.

“Let me fucking help you,” Cookie demanded, his voice still gruff and raspy, as if he ordering Énna instead of asking would shatter Énna’s resistance.

Énna tried not to give in to the way Cookie slackened his hold as if to cradle him, but he knew continuing the battle was hopeless, had been since he crossed into Devil’s territory.

His shoulders slumped and he squeezed his eyes shut when he said, “Plants. My magick works well in a garden, with food. I… I can help there.”

Silence hung between them for a moment before Cookie asked, “How?”

Énna shook his head. “I can’t explain it. I just do. I can increase the crops, keep them healthy, and give the club not only enough to provide for the community but to sell or provide for others as well.”

His chest ached with each word he spoke. The thought of being another cash cow, of being shackled by someone else’s greed destroyed a piece of him and the magick coiled beneath his skin.

“Just…” Énna couldn’t help himself when he began to tremble and he words clogged his throat, but he pushed ahead. “Whatever happens, whatever you decide… I can’t be a prisoner. I need to…”

Gods, he hated being vulnerable and worse than that he hated begging. Letting out a shaky breath, Énna surrendered his weight to Cookie.

“You’re not a captive, babe. We’ll figure something out.”

“We’re not figuring anything out.” Seeing his chance, Énna jerked free from Cookie’s hold. He turned around and walked backward, changing his course. “I can take care of myself. I’ll figure it out.”

“You’ve done a shit job of it so far.” Cookie snorted, his face contorting into the asshole features Énna knew best.

His shoulders tensed at the jibe and he narrowed his eyes. “Don’t wait up.”