As some of you know, today—December 19th—is my birthday. I’m pretty vocal about it.

Also as most of you know Prickly Business was released on audio (at Audible) on the 17th.

I wanted to do something special for my birthday and what’s more special than giving gifts? So… here goes. For my birthday I’m giving away an audiobook of Prickly Business (narrated by the awesome Iggy Toma) and one ecopy of Reindeer Games.

Since I was a kid, my family has gotten together for our birthdays. Mostly for breakfast. So it’s become a thing. Every year, for my birthday, we get together and someone cooks breakfast. This year it’s French toast. I love French Toast.

As I have two releases in December (the month of my birth) I’m giving away one audiobook copy of Prickly Business and one ebook copy of Reindeer Games. 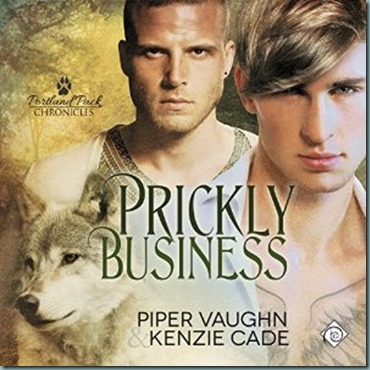 Prickly Business by Piper Vaughn & Kenzie Cade, Narrated by Iggy Toma (have I mentioned how much I love Iggy Toma?)

Some people might call Avery Babineaux a prick. He’s a hedgehog shifter from an old-money Louisiana family, with a penchant for expensive shoes and a reputation for being a judgmental snob. His attitude is why he and his fated mate are estranged. Not that Avery cares. He doesn’t want to be mated to some blue-collar werewolf anyway. Or so he keeps telling himself.

No werewolf likes to be looked down upon, least of all Dylan Green. He doesn’t need a mate, especially not some snotty hedgehog who sneers at his custom motorcycle shop and calls him a grease monkey. But when Avery gets into trouble with a shady loan shark, Dylan can’t stand by and let him be hurt – whether he wants the brat or not.

Yet once Dylan steps into Avery’s world, he realizes there’s more to Avery than his prickly exterior, and that unexpected vulnerability calls to Dylan’s protective instincts. The sassy little hedgehog needs a keeper, and despite their horrible first impressions, Dylan starts to believe he might be the wolf for the job.

Dashing von Stride has one thing on his mind: winning the window display contest for the Miracle on Main Christmas Contest. His plans are set and ready—and then he walks into his toy store, Reindeer Games, to find a sleigh that shouldn’t be there. The mystery sleigh sparks a new plan, however, and now all Dash needs is the perfect Santa to model his display after.

This year, the pranks with his reindeer have gotten out of hand. Instead of preparing for the Big Day, Niklaus Kringle is hunting for his missing sleigh. Locating it should have been easy, but games easily won are seldom worth playing…

View all posts by Kenzie